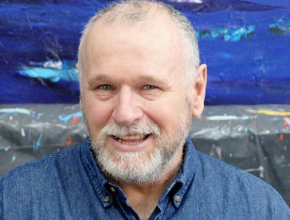 In early 2011 he exhibit with Elisabeth Ochsenfeld from Heidelberger Akademie at Art Museum in Timsoara, Romania and in Warmia and Mazury Music Hall in Olsztyn, Poland. In May 2011 he exhibit at the international exhibition Artists at Home & Abroad at the Broadway Gallery, New York.

Davor had his first one man exhibition in New York at Broadway Gallery in October 2012.

He had his second one man exhibition in New York at Broadway Gallery in October 2013.

Critical writings and essays have accompanied his growth, which has until this very day been indisputable and mature. They have been written by renowned fine arts critics and theorists. Special acknowledgment was given by the government newspaper Vjesnik’s fine arts critic Marina Tenžera, who wrote, “Finally – painting.”  Elevating his most recent cycles to “leading places on the Croatian painting scene”. A critical essay by the late art historian and art critic Darko Glavan in the monograph edited by Croat academician Tonko Maroević, presented a systematic analysis of Vuković’s entire opus in 2010. This situated his painting ingenuity as an essential part of contemporary Croatian art.

Some of his paintings are to be found in public collections of Croatian national parks Risnjak, Paklenica and Plitvice Lakes, some in museums throughout Croatia, in Croatian embassy in London and embassies of the United Kingdom, Austria, and China in Zagreb, townhall in Zaprešić, sacral and public institutions, and in private collections around the world.

Vuković’s poetry has been awarded many times. In 2004 he published his first collection of poems called «Gatara» («Fortune-teller»)(published by «Matica Hrvatska Zaprešić»). The book was promoted in Association of Croatian writers in Zagreb.

Davor Vuković is a member of Croatian Association of visual artists and Croatian Composers Society.